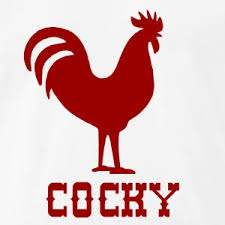 I tried sharing this to my site via the article’s page several times, but it won’t go through except to my FB page. So I’m providing a part of the article with the link for you to read the whole kit’n’caboodle. This is a must-read for all writers, as the words we use in our work, well, make our work what it is. How any one writer can assume she can trademark an everyday word is simply outrageous and narcissistic.

I struggled with how to title this post. When I first heard about this whole trademark on the word “Cocky” thing, I was shocked. I didn’t know what to say. Then, after a few days, I grew worried over what this will mean for the future of being a writer because this kind of thing of trademarking commonly used words stifles creativity. Over the past couple of weeks, I became aware of other words that were in the process of being trademarked, and I just shook my head in disbelief this was even happening. Then I found out about someone trying to trademark the word “Forever” yesterday, and that’s when something snapped inside of me. I also heard something about “shifter world” being possibly trademarked, but I didn’t see too much about that. (As a side note, it looks like the author isn’t going to go through with trademarking “Forever” so that’s good.)

But anyway, now I’m mad. It’s taken some time for me to soak in the ramifications of what this whole #cockygate thing really means. It’s not just about the word “Cocky”. It’s not just about Falenna Hopkins. I had no idea who Falenna Hopkins even was until I found out she had trademarked the word “Cocky” and was threatening authors with C&D letters to change their titles just because she doesn’t want other authors to use that word in the title of their books.  Kevin Kneupper sent in a petition to cancel the trademark on the word “Cocky”, so I thought this was all going to go away.